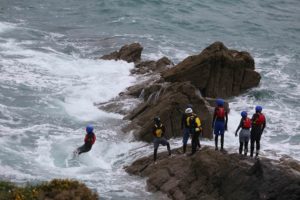 Coasteering is a new adventure activity first pioneered in Britain by St David’s-based activity provider TYF. For the uninitiated, it involves scrambling, suitably-attired, along cliffs and rocks to jump into the waves. There is a minimum age of 12, but otherwise the organisers say it is a great activity for families and groups (http://www.tyf.com)

Glebe House guest Rob Chaplin was coasteering session as a present by his wife Jess. He went in early April 2017 and has kindly provided the following brief notes:

I went with a family of four (three for the event while their mother watched from the cliffs). Our guides were from TYF Adventure who incidentally spawned the activity as a sport and were heavily involved in drafting the initial charter. It’s a fledgling sport and TYF are responsible for safety, equipment and site selection etc. 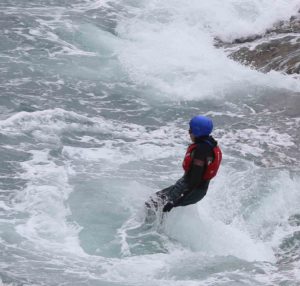 We started just a 10 minute walk from TYF’s St David’s shop, but by all accounts it can be done on any piece of coastline where the tidal/cliff conditions are right. We wore wetsuits, buoyancy aids and helmets but in the colder months there’s no reason why you couldn’t do it in a semi-dry or dry suit.

Coasteering boils down to jumping off rocks into the sea. You leap into places where the water is rotating like a whirlpool or just swim around the coast enjoying the view. It’s all about having fun in the water. We were looking for a rush, so jumping 15′ into surging water was brilliant, but of course others could just float in the water and enjoy the waves and currents.

We were out for about two hours but with the right equipment and fitness you could go out for hours just floating between rocks or swimming through caves and caverns. Anyone with a bit of adventure would enjoy it and, obviously, confidence in the water is essential. You need to be reasonably fit to swim as the tides, currents, winds and waves throw you about a bit. You also need some upper body strength to climb out the water again as the waves try their best to knock you back into the sea.

With regards to seasonal coasteering, I wouldn’t say water temperature is an issue if you have the right equipment, but the state of the sea state definitely is important. If the sea is too rough it wouldn’t be much fun, but TYF wouldn’t let anyone go out if it wasn’t safe. Would I do it again? DEFINITELY!! It was amazing fun and I loved being in the water.

I am indebted to Chris Scholey for the photographs used here. His website is http://www.Memoryphotography.co.uk